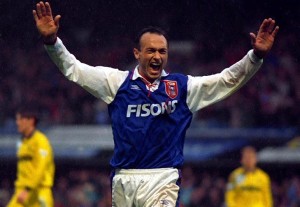 The brain injury charity’s annual sponsored event enters its eighth year having raised over £30,000 since its inaugural year in 2009.

Milts, who made over 330 appearances for the Blues and is director of Academy Sales at the Championship club, is preparing for the club’s London to Amsterdam Cycle Challenge in June.

Alongside him will be Headway’s own team, joining the 50 cyclists signed up for the ride so far.

He and other members of Team ITFC will be joining Seven Group’s team, who last year won the Headway Trophy for raising the most sponsorship in their seventh year of participating, which will again be competed for by companies this year.

The fundraiser starts at 9.00am at Headway’s Ipswich Hub at Epsilon House on Ransomes Europark in Ipswich, where the circular route will also finish.

The 28 mile route repeats last year’s course, which takes in Bucklesham and seaside town Felixstowe along the East Suffolk coast, with cyclists given the option of an additional 10 mile loop past Newbourne.

It is open to individuals, families, groups and corporates.  It is an ideal team building exercise for companies, with Ashton KCJ, Scrutton Bland, Ryan’s, Getech, and 2016 sponsor Gotelee just some of the local businesses that have taken part in recent years.

It’s £10 to participate unless you have sponorship.  Register your interest by telephoning Helen on 01473 712225 or email: helenfairweather@headwaysuffolk.org.uk.

You can find the route, how to set up an online sponsorship page and join others on our Facebook event page at: www.headwaysuffolk.org.uk/events