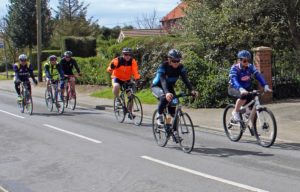 Headway Suffolk is hoping to reach a target of £40,000 raised for its vital services from its annual Sponsored Cycle Ride as the event reaches its ninth year.

Sixty cyclists took part in the popular fundraiser last year and raised £5,905 – taking the running total amount to in excess of £36,500 since the inaugural event in 2009.

The charity, which supports 250 local adults every week with acquired brain injuries and neurological conditions, hosts the Cycle Ride on Saturday 20 May at 9.00am, which starts and finishes at the Ipswich Hub at Epsilon House, West Road, on Ransomes Europark in Ipswich.

The 28 mile circular course takes in Bucklesham and seaside town Felixstowe along the East Suffolk coast, with cyclists given the option of an additional 10 mile loop past Newbourne.

It is open to everyone and is an ideal team-building exercise for companies with the Headway Shield presented at our Awards Dinner in November to the team that raises the most sponsorship.

It’s £10 to participate unless you have sponsorship. You can find the route and sponsorship details on our Events page.

All monies raised goes to fund Headway Suffolk’s rehabilitation, therapy and support services at its hubs, in the community and at people’s homes throughout the county and south Norfolk.

The charity’s communications and marketing officer David Crane said: “The Cycle Ride has been our flagship fundraising event since it started and it remains as popular as ever.

“The route through the rural delights of East Suffolk is a big hit, and the extra 10 mile loop pushing it closer to a total of 40 miles is a good test for more experienced cyclists and those who like a challenge.

“£40,000 raised would be a great achievement by everyone over the last nine years and I’m confident our tremendous supporters can reach the goal. The funds make such a significance to us delivering the variety of high-quality services for local brain injury survivors.”