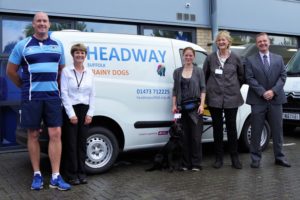 Eighteen prisoners from HMP Hollesley Bay in Woodbridge have raised £750 for Headway Suffolk’s Brainy Dog project, after completing a half-marathon in the prison’s grounds.

The idea was the brainchild of one prisoner after he enjoyed four months’ voluntary experience with Headway’s brainy dogs project as a walker and trainer, and wanted to give something back to the charity.

The prisoner, who has now been released, organised the event on 23 May with another offender and momentum quickly gathered pace, as a half-marathon circuit consisting of 21 laps was marked out in the prison grounds and saw 18 prisoners in total take part, cheered on by 50 others.

The brainy dogs scheme, now in its seventh year, is supplied rescue dogs who are then trained by a small team of prisoners to become companion dogs to people with a brain injury or a neurological condition.

Representatives from Hollesley Bay presented Headway Suffolk with the cheque at its hub at Epsilon House, Ransomes Europark in Ipswich on 24 July.

Helen Fairweather CEO of Headway Suffolk said “We are grateful to the prisoners for raising this money for us. We very much hope that this has helped with their rehabilitation.”