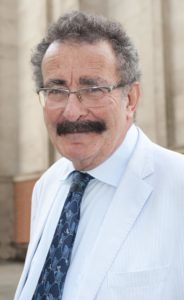 Neurology charity Headway Suffolk is delighted to announce that Professor Robert Winston will be a headline speaker at its fourth Neuro Conference on Wednesday 17 October 2018 at Kesgrave Conference Centre, Twelve Acre Approach, Kesgrave.

Professor Winston is internationally-renowned as a scientist, doctor, politician and writer, and has an extensive media career in television and radio as one of Britain’s best known health experts.  His book, The Human Mind, explains how the human brain works.  He is also a prominent Labour peer in the House of Lords.

His most recent high-profile TV appearance was in September 2017 on The Late Late Show with James Corden, where he spoke about his most recent book, My Amazing Body Machine: A Colourful Visual Guide To How Your Body Works, and produced various scientific experiments.

Professor Winston will present to Conference delegates on how the human brain works from his wealth of knowledge and expertise.

Headway Suffolk has attracted huge interest in its first three Conferences, with author Jane Hawking talking about her life as a family carer in 2017, famed scientist Stephen Hawking making a rare public appearance to discuss his life with motor neurone disease in 2016, and local brain injury survivor Andrew Renton taking his first public steps in 21 years in 2015.

This year’s event promises to be another highlight in Suffolk’s calendar with Professor Winston set to be joined by other eminent keynote speakers (to be announced in due course) to address guests on a broad range of subjects related to brain injury and neurological conditions.

Helen Fairweather, the charity’s Chief Executive, said: “Headway Suffolk is gaining a reputation for having renowned speakers at its annual neuro conference, and this year is no exception”

“We are very excited about Professor Winston speaking at our conference.  Neurology is one of his passions and areas of expertise.  We are all looking forward to hearing what he has to say.”

Tickets are priced at £40 (plus booking fee) and are available from Eventbrite at: www.eventbrite.co.uk/e/headway-suffolk-neuro-conference-2018-tickets-40194431627.