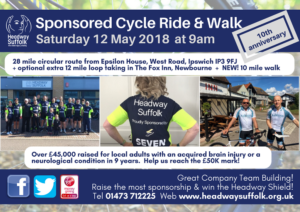 Headway Suffolk is marking the 10th anniversary of its Sponsored Cycle Ride in Ipswich with a new 10 mile walking route as well for those who prefer to be on their feet!

Hundreds of cyclists, experienced and inexperienced, have enjoyed the Headway’s flagship fundraiser since it started in 2009 and, between them, have raised a fantastic £45,000 for the charity’s vital services for local adults with an acquired brain injury or a neurological condition.

The ride and walk both start at 9.00am on Saturday 12 May at the charity’s Ipswich hub at Epsilon House, West Road, on Ransomes Europark in Ipswich, where they also finish.

The 28 mile cycling route takes in Bucklesham and seaside town Felixstowe along the east Suffolk coast, with cyclists given the option of an additional 12 mile loop past Newbourne.

The new 10 mile walking route heads along Felixstowe Road to the University of Suffolk and Suffolk New College, and along Woodridge Road past Ipswich Hospital.

It is open to everyone and is an ideal team-building exercise for companies with the Headway Shield presented at our Awards Dinner in November to the team that raises the most sponsorship.

The Seven Group have won the Shield for eight consecutive years!  Other participating groups have included Ashtons Legal, Pound Gates, Scrutton Bland, Gotelee, Marshall Hatchick and a Headway team (including the CEO!).

It’s £10 to participate unless you have sponsorship.  You can find the route and sponsorship details at: www.headwaysuffolk.org.uk/events.

All monies raised goes to fund Headway Suffolk’s rehabilitation, therapy and support services at its hubs, in the community and at people’s homes throughout the county and south Norfolk.

The charity’s communications and marketing officer David Crane said: “Last year our tremendous supporters raised a brilliant £8,300 – the most in any single year –and these funds make such a significance to us delivering the variety of high-quality services for local brain injury survivors.

“The ride creates a great team spirit and everyone really enjoys being part of the event.”