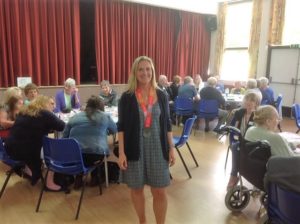 Headway Suffolk’s two dementia hubs in Ipswich have been boosted by almost £2,500 thanks to the sponsorship from one of its two London Marathon runners.

Jo Fellowes, 40, completed her first London Marathon on April 22 in a time of 5 hours, 39 minutes and 33 seconds, and she chose to support Headway’s two monthly groups for people living with dementia because it’s close to her heart as two of her grandparents suffered with the illness.

Headway runs a social support group with a fish and chips lunch for people living with dementia on the second Friday of the month at St Augustine’s Church in Bucklesham Road, Ipswich. They must be accompanied by a carer.

A second group will start on June 28 on the fourth Thursday of the month at St Michael’s Church Centre, The Drift, in Martlesham.

Both groups will benefit from a total of £2,488.33 raised by Jo, which far exceeded her expectations after setting a target of £1,000.

The groups’ organiser, Maureen Howes, will be using the money to purchase a variety of equipment and resources for engaging activities, such as indoor curling and boccia equipment.

Jo, who has been running for four years, said: “I am so proud and privileged to have been able to raise a fantastic amount of money for the dementia groups run by Headway.

“Training for, and running the London Marathon, has been an amazing experience in itself, but being able to support such a brilliant cause has made all the early morning and cold/wet training runs worth it. I’m thrilled that it is branching out to set up another group in Martlesham to help support even more people.

“I would encourage anyone who cares for someone suffering with dementia to get in touch with Maureen and attend the group for help, support and friendship.” 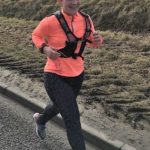 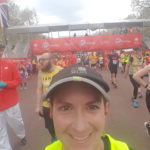 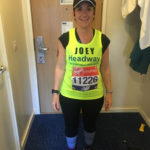 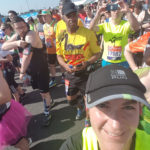 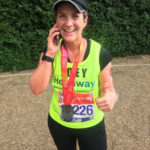 Jo, from Ipswich and who works in education at Suffolk County Council, had targeted a finishing time of between four and half to five hours, but she had to adjust her plans early on due to the intense heat of the hottest London Marathon on record.

She explained: “The heat on the day made getting to the finish line even tougher than I had imagined, and I’m proud to have made it, albeit not in the time I had hoped for.

“The support of the crowds was phenomenal, and to see so many people undertaking this challenge whilst raising so much for charity was a fantastic thing to be part of.

“I’d like to thank all of the people who supported me with sponsorship, and my friends and family for helping and encouraging me all the way through the training and the day itself.”

The groups, which run between 11.45am – 3.15pm, cost £6, which includes a fish and chips lunch and refreshments. The person with dementia must be supported by a carer.