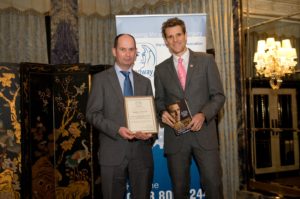 Andrew suffered an acquired brain injury while riding his mountain bike on his way home after marshalling in a race in Ipswich in July 2008.

Andrew, who was a director at BT, received invaluable support from Headway Suffolk on his road to a full recovery and won a national Headway UK ‘Achivever of the Year’ award for his achievements in December 2012.

Andrew said: “The support given to my family from Headway Suffolk was invaluable, as well as the help they gave to me.”

Andrew later became a trustee of the charity.

Along with his friend Paul Martin, Andrew raised £3,905.57 for Headway Suffolk towards the purchase of its Ipswich hub at Epsilon House by cycling 800 miles in five-and-a-half-days from Bilbao in Spain to Adastral Park in Ipswich in May 2011.

He is now manager of Evans Cycles in Ipswich.

Headway Suffolk has attracted huge interest in its first three conferences, with author Dr Jane Hawking talking about her life as a family carer in 2017; famed scientist Prof Stephen Hawking making a rare public appearance to discuss his life with motor neurone disease in 2016; and local brain injury survivor Andrew Renton taking his first public steps in 21 years in 2015.

This year’s event promises to be another highlight in Suffolk’s calendar, with five eminent keynote speakers addressing guests on brain injury, stroke, neurology, carers and dementia.

Tickets, which are priced at £40 (plus booking fee), are now selling fast and those interested in attending are advised to book as soon as possible to avoid the disappointment of missing out.

They can be purchased from Eventbrite at: www.eventbrite.co.uk/e/headway-suffolk-neuro-conference-2018-tickets-40194431627.

Specially-discounted tickets for persons registered as disabled, priced at just £10, are available directly from Headway Suffolk by contacting them on 01474 712225 or email: helenfairweather@headwaysuffolk.org.uk.