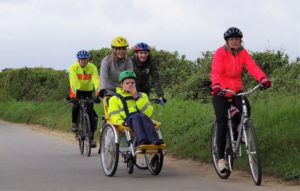 The mixture of 50mph winds, ice-cold rain and hail made conditions extra gruelling for those tackling the 30, 40 and 50 cycling routes through Ipswich, Martlesham, Felixstowe and Newbourne, as well as those on their feet for the 10-mile walk to the University of Suffolk and back to Headway on West Road on the Ransomes Eurorpark, where a buffet proved more than welcoming.

Among those taking part were Tony and Leanne Baines, who took it in turns, along with Headway support workers James and Lydia, to propel their 18-year-old son Mark, who is blind and deaf after suffering a brain haemorrhage as a young child, in his specially-adapted wheelchair bike around the course.

Leanne said: “It was a fantastic experience and everyone enjoyed it, including Mark, who was singing all the time!

“It was hard work up and down the hills as Mark’s bike is very heavy and you have to take it slowly because you have to back pedal when going down hills, so it takes extra effort to brake and you can’t really freewheel.

“It was nice to get to the end and it was a great atmosphere. It was great to pedal with James and Lydia, because they are young and very enthusiastic, and often on other rides I’ve done you can get separated but we didn’t.

“We all expected beforehand not to make it all the way round but we did, cutting off a few hills and we did 25 miles. We were very proud of ourselves.” 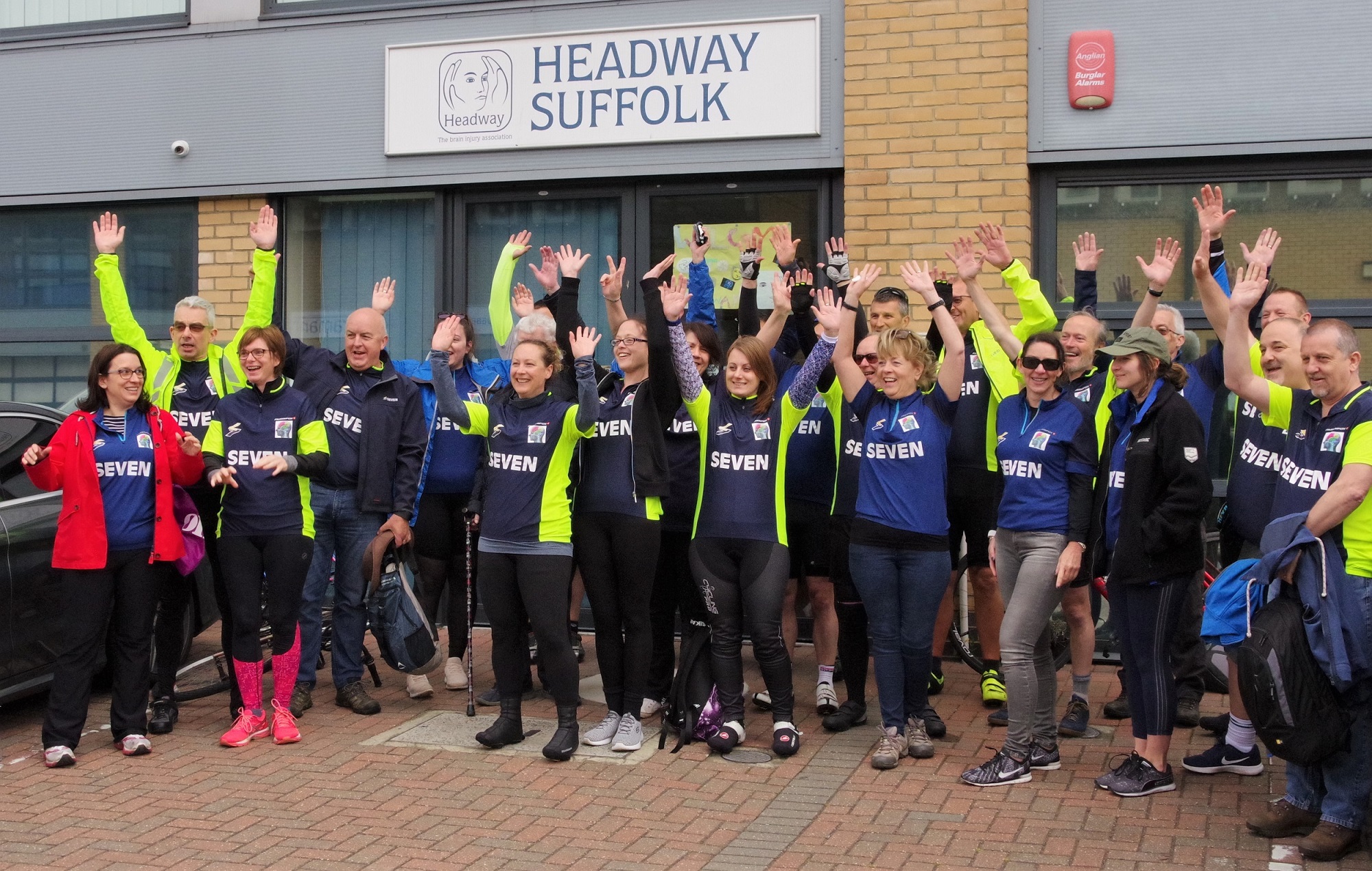 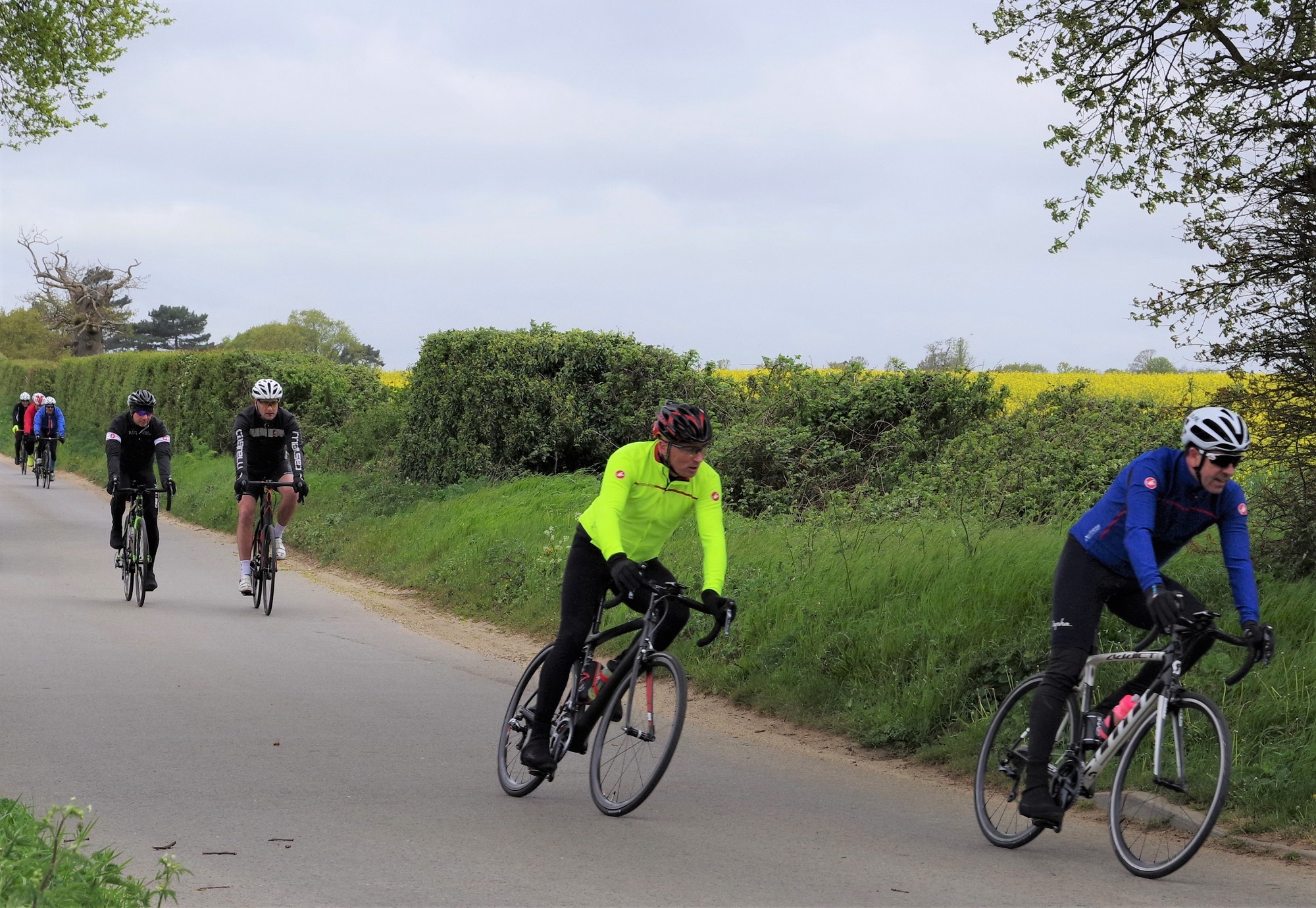 A large bulk of the cyclists, 25, were from asset and property management company Seven Group, who have been a mainstay of the charity’s flagship fundraising event since it started 11 years ago. They have so far raised approaching £3,000 for Saturday and expect it to rise further.

Steve Cole, the group’s deputy Managing Director, said: “The weather wasn’t certainly good for cycling, so we reduced the miles we did from 50 to 30 for safety reasons. Everyone achieved getting round with no traumas or issues, which is always good.

“We enjoy the Cycle Ride. It’s good fun but usually when the weather’s better! We had some customers join us this year, which was great, with a couple coming up from Dorset and a couple from Hadleigh.

“We have a good core of people who support us and Headway Suffolk is a great charity doing tremendous work and we’re very pleased to support it.” 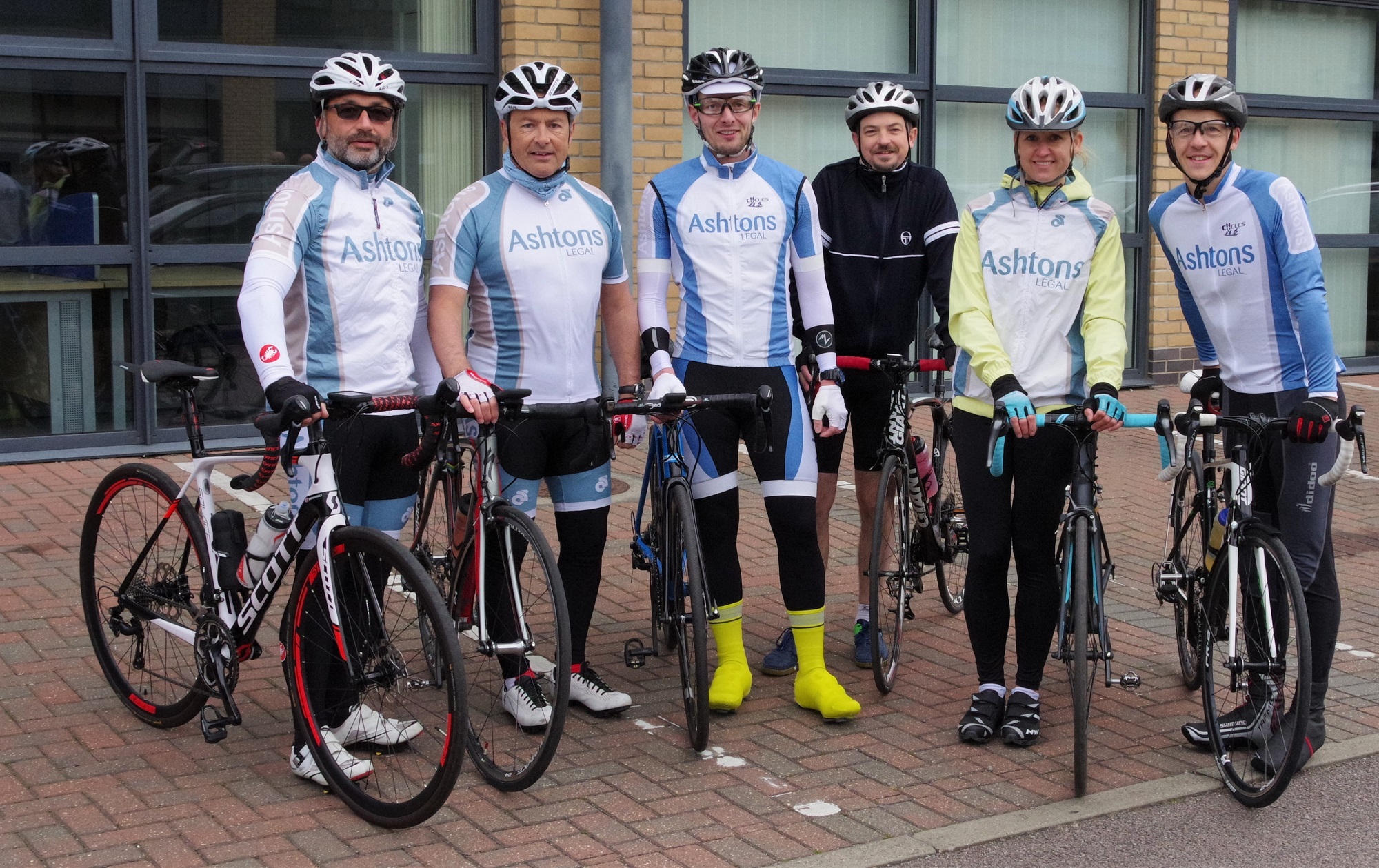 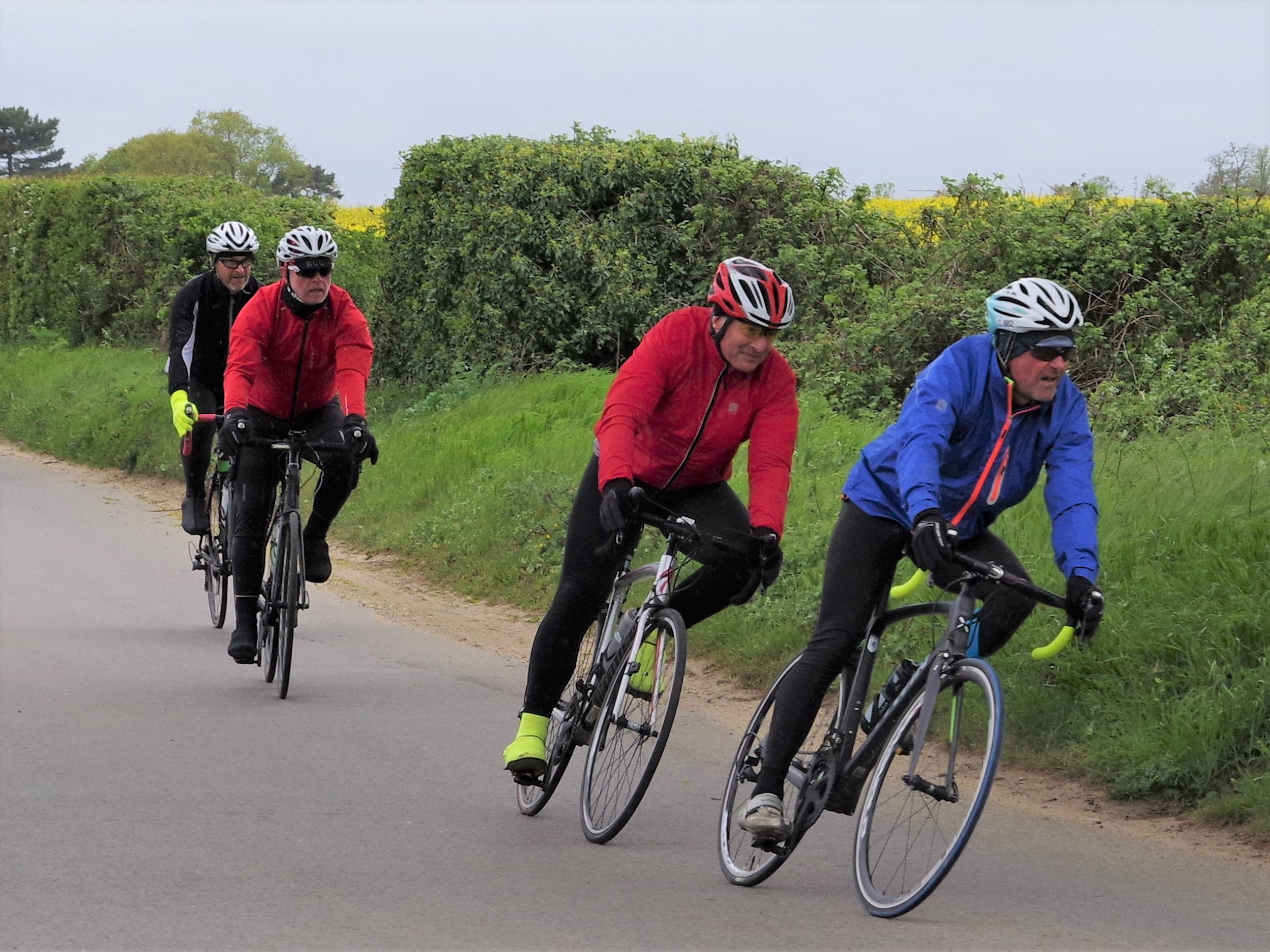 Ashtons Legal, one of East Anglia’s leading law firm, are also a regular backer of Headway Suffolk and have taken part in a number of its Cycle Rides, with eight participants on Saturday.

“The weather was brutal,” said Dave Richardson, their Customer Relationship Manager, “and if it wasn’t for a good cause we probably would have stayed at home. The strong winds made getting up hills double the amount of work than usual.

“Apart from that, it was an enjoyable ride and we like supporting Headway Suffolk, so it makes it all worthwhile.” 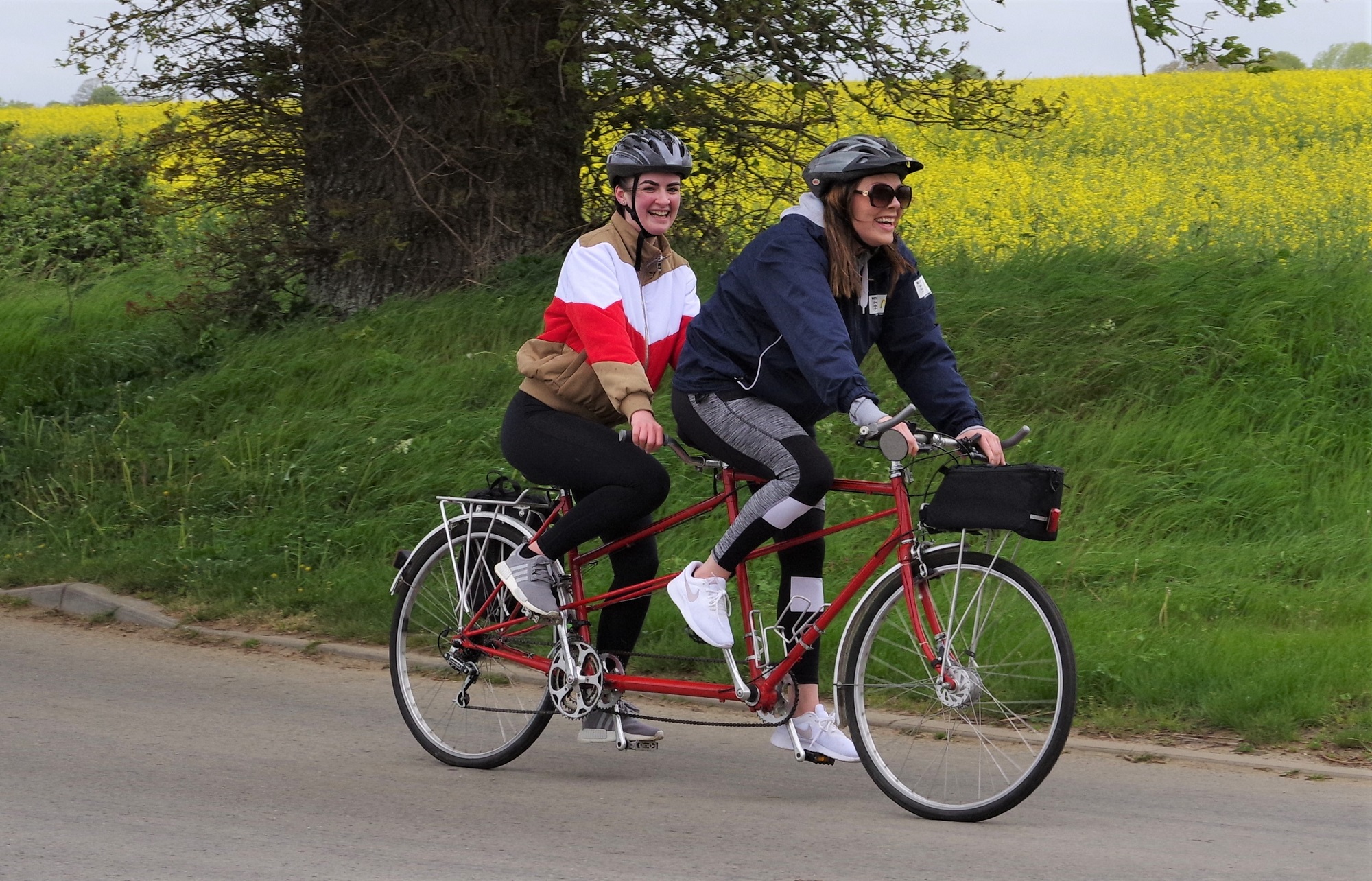 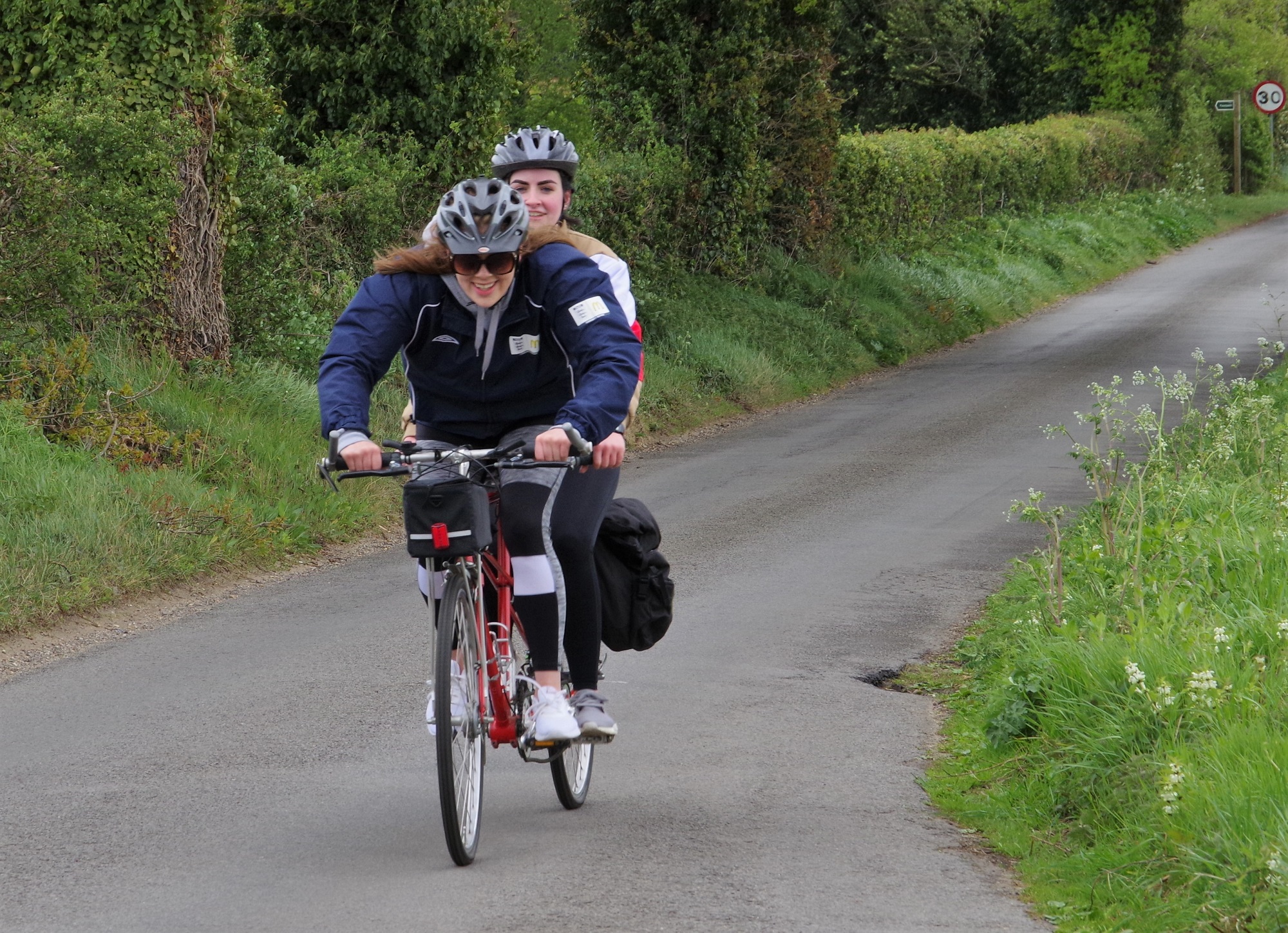 Tandem duo Alicia Ray and Ellen Burman also made it round the course safely and with smiles as they enjoyed the camaraderie and team spirit of the event.

Alicia, 19, from Ipswich and Ellen, 22, from Woodbridge, have both worked as brain injury rehabilitation staff at Headway Suffolk for less than a year and they decided to pair up on a tandem.

Alicia, who is also training to be a paramedic, said: “It was a lot of fun and not as difficult as we had expected. We got a good rhythm and worked really well together.

“It was great as on the ride other cyclists were asking how we were doing and giving us support, so it was really friendly, and the bad weather wasn’t too bad so we were very happy we did it.” 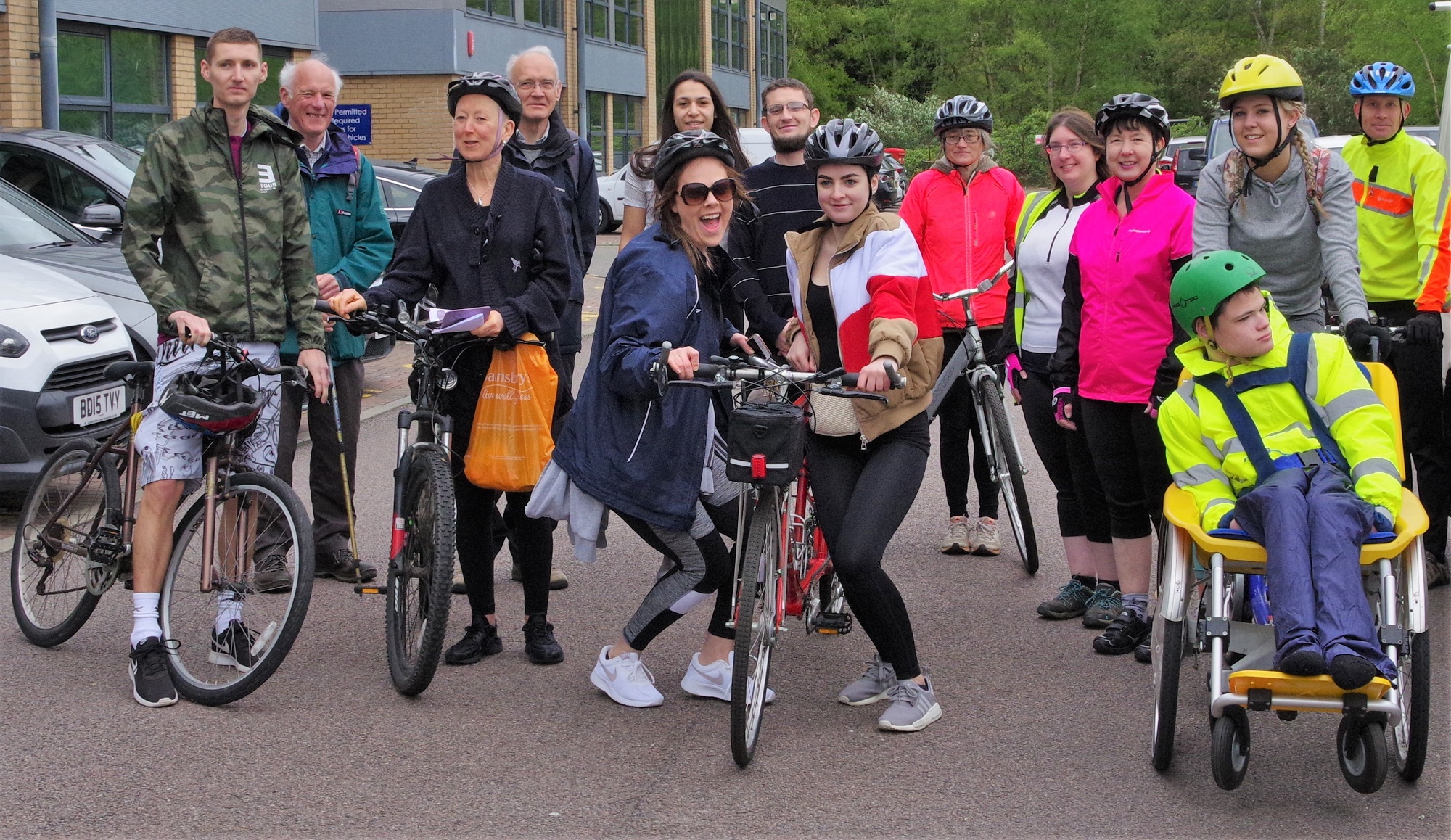 Headway Suffolk’s chief executive, Helen Fairweather, battled on to the end by cycling the entire 50 miles and thanked everyone for their fantastic efforts.

She said: “Everyone did extremely well considering the bad weather, with the strong winds whipping up sand off the fields.

“We really appreciate everyone’s efforts and achievements on the day to help promote the work of Headway Suffolk for local adults with brain injury and neurological conditions, and raising funds for our new Professor Stephen Hawking Neuro Centre in Ipswich.”