Life now for Sam Norris ahead of Conference speech 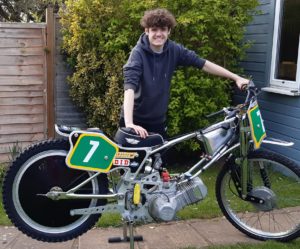 Claire Norris has spoken of the frustrations that living with a brain injury can bring while remaining positive at the continued progress in recovery.

Claire is the mother of Sam Norris – the 17–year-old Suffolk speedway rider who suffered a life-threatening brain injury in a crash while racing in Glasgow in June 2019.

It was touch and go if Sam would survive, and the remarkable strides he has made in his recovery in less than two years has been a big influence on others going through the same situation and won him admirers globally.

Claire was giving an update on how life is for the family now ahead of her and Sam being keynote speakers at brain injury charity Headway Suffolk’s Neuro Conference on 12 May, which will be live streamed online.

“Sam is frustrated at the moment. On the outside he wants to get back racing and be able to drive, but it’s the hidden things that frustrate,” she said.

“He feels cheated as he was doing very well and he sees what others are doing on social media and he wants to be there. But he’s passionate about getting back to where he was and he’s so motivated and driven to prove that.

“A lot of people are affected by injuries. It’s still raw, you live it every day as it’s always there, but life moves on.” 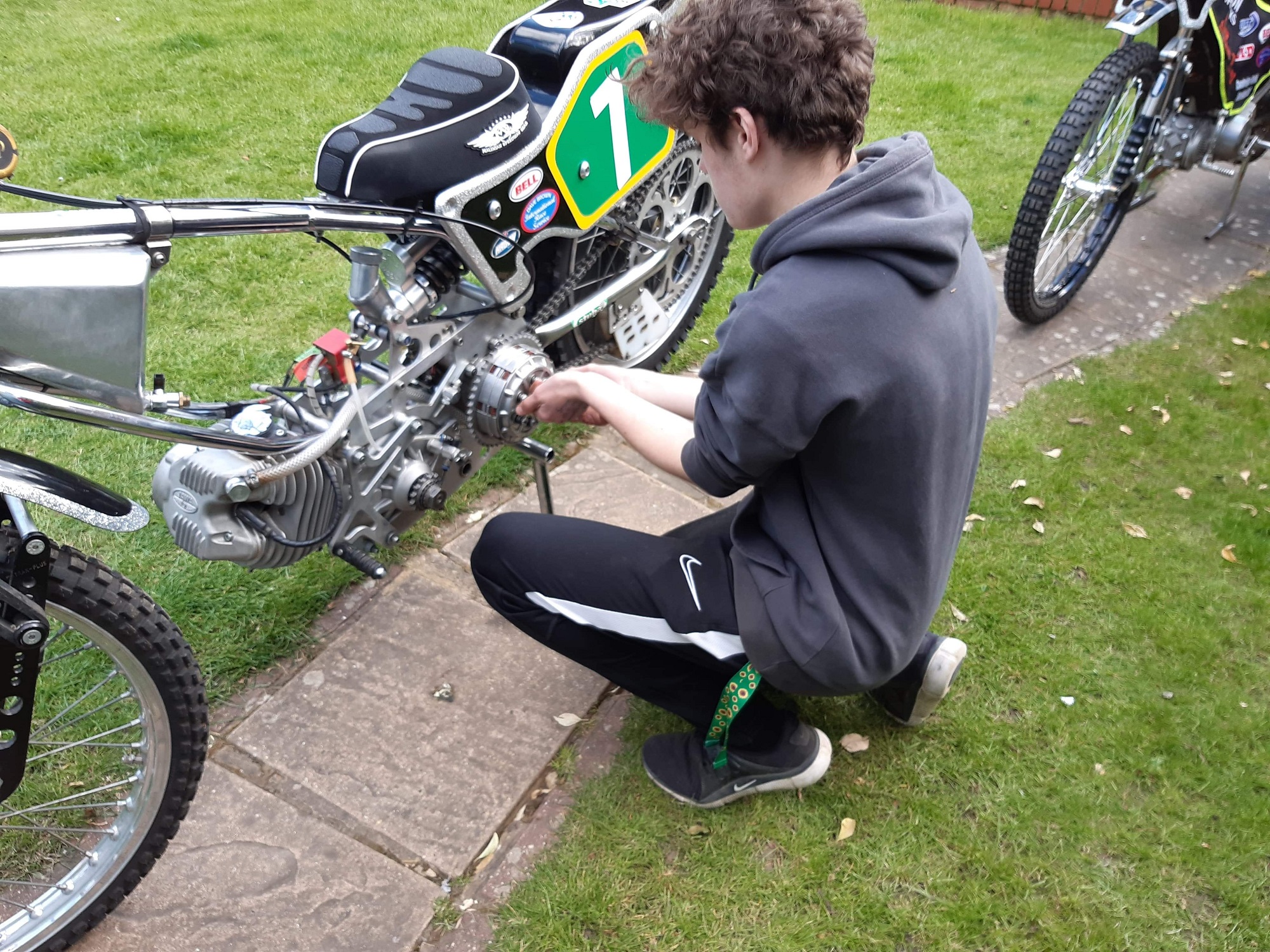 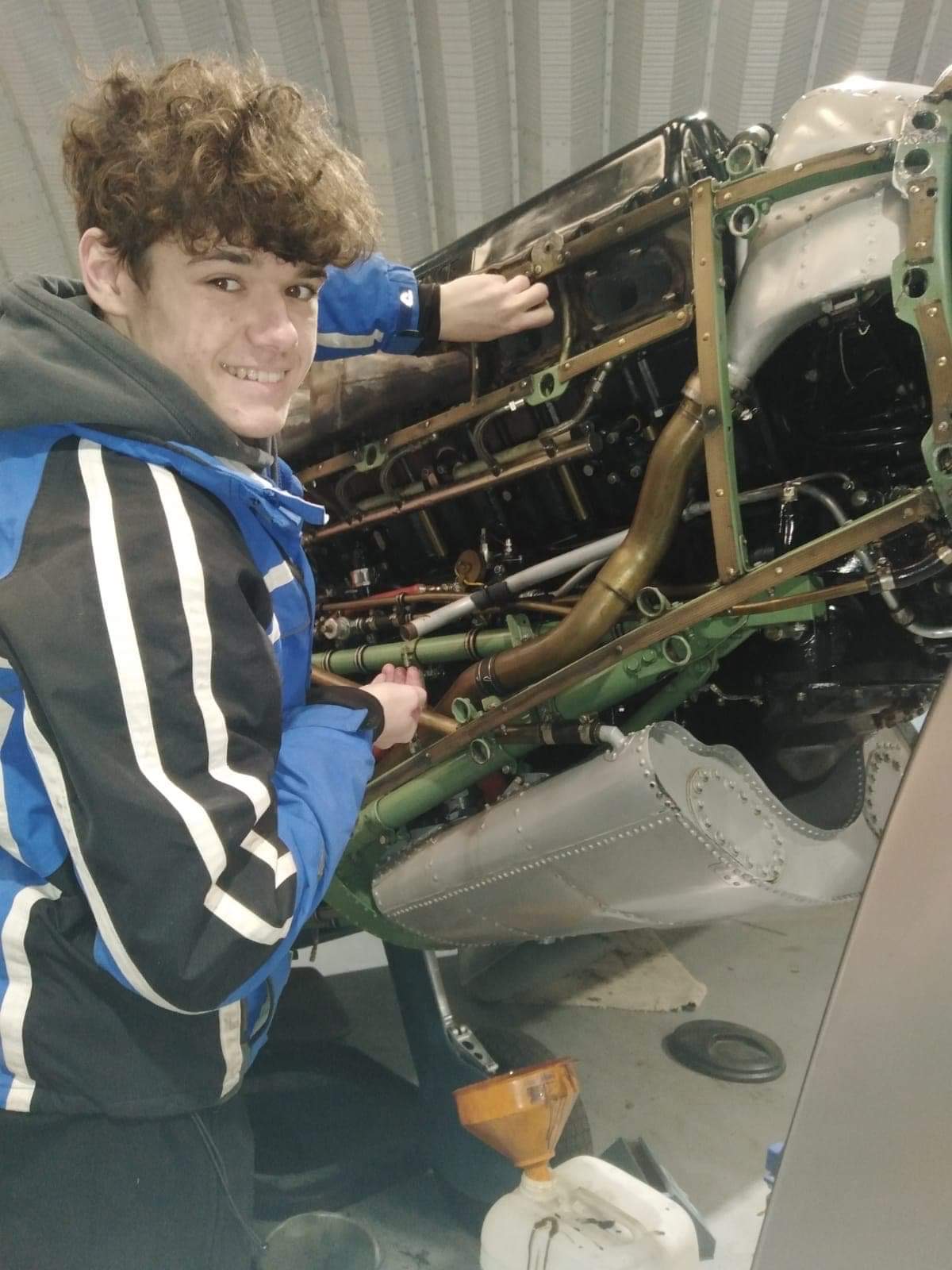 Sam is currently studying motor mechanics at Cambridge Regional College and plans to move up to level 2 in September. But home studying during Covid hasn’t come easy.

Claire, a special needs teaching assistant and intervener, said: “It was quite a struggle. It was three days online looking at a screen and that was difficult for Sam with his fatigue. Fortunately I was also at home so I was able to help. Now he’s back at college two days a week with one day online and he loves it.”

As part of the practical experience for his studies, Sam has been working on the 250cc grasstrack bike on which he was unbeaten just two weeks before his accident.

Sam already returned to a bike on a GT140 eight months after the accident, and he now plans to race the 250cc bike for the first time on 20 June in a Classic Grasstrack Club meeting near Stansted on the second anniversary of his accident.

“Putting the engine back in has brought back a lot of memories,” said Sam, after the engine was taken out and the bike stored away on his return from hospital. “Seeing all the equipment again like the brand new framekick makes me realise how I lucky I am.”

The guidance and support of his father Chris has been integral in Sam’s mechanical learning at the family home in Linton, near Haverhill. Sam also supports Chris with the restoration of classic fighter jets.

“He always says ‘Dad makes things look easy’,” said Claire. “He’s teaching him all the way through, letting him take ownership and giving him the knowledge.” 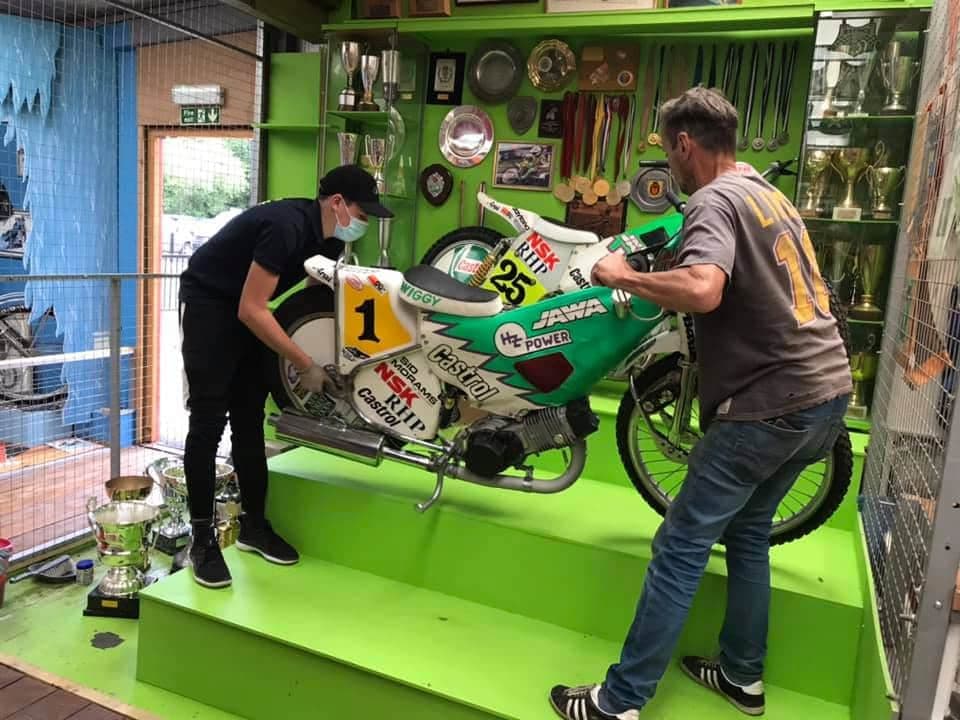 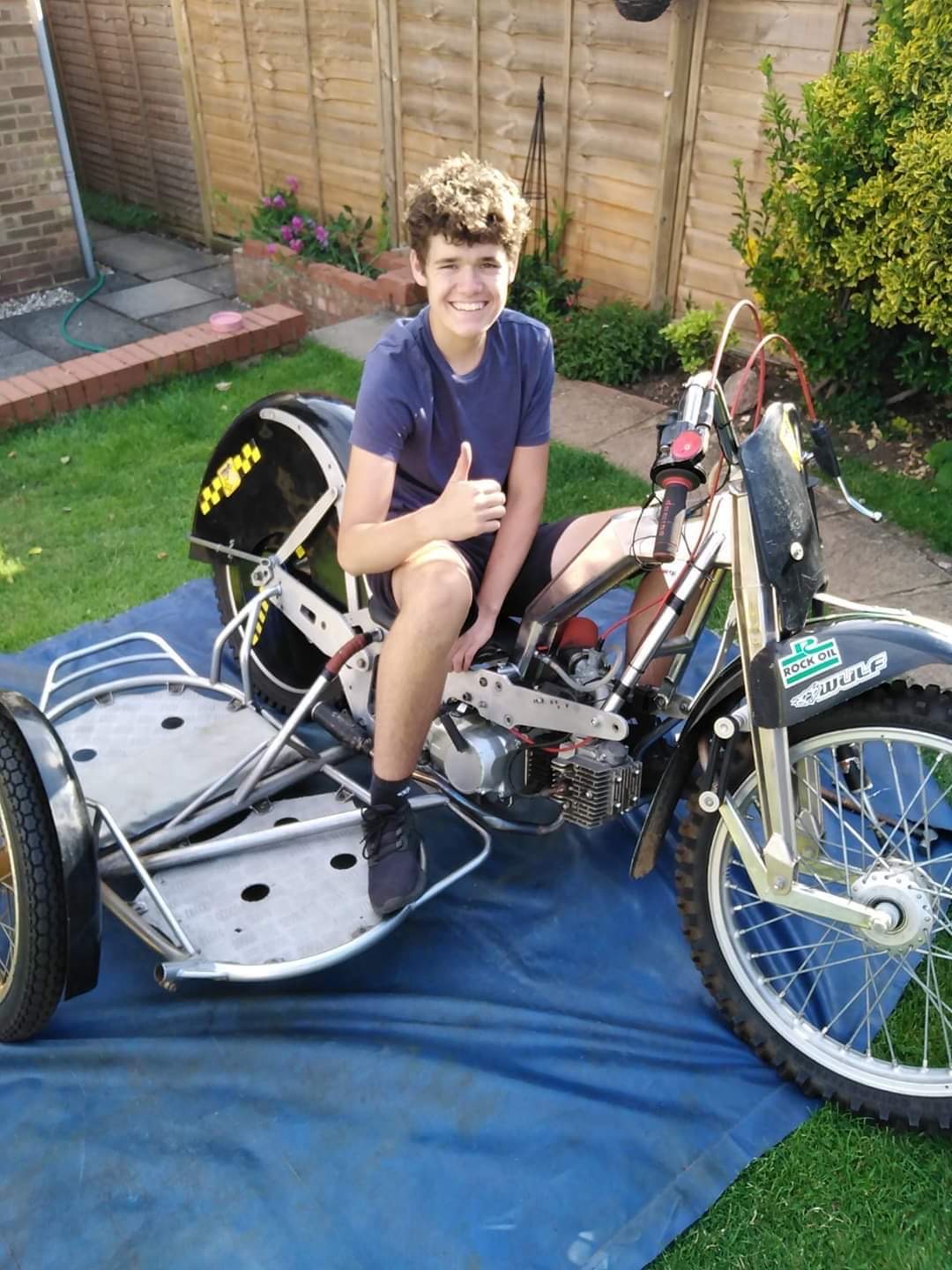 While Sam remains focused on being back on the grasstrack bike in the summer, with the ultimate dream of returning to speedway when ready, Claire reveals the frustration at the lengthy process for Sam to be able to drive.

“We started the application to the DVLA in August and disclosed his brain injury. It’s a frustrating wait for Sam, because if he didn’t have the brain injury he would have had it by now.”

Fatigue remains the main difficulty for Sam day to day. “My fatigue is still there but it’s reduced heavily and now comes on at the end of the working around 4, 5 or 6pm,” he said.

Claire added: “Lockdown meant he could stay at home and this helped his fatigue. It’s still there, and if he was to have a grasstrack meeting at the weekend he would have to prepare for it the whole week rather than just the night before.

“What we want to emphasise at the Conference is that sad things happen and it’s fighting for the support you need. Every case is different. Looks can be deceiving. It’s very much a hidden injury but you can still achieve, even if it’s in a different way.” 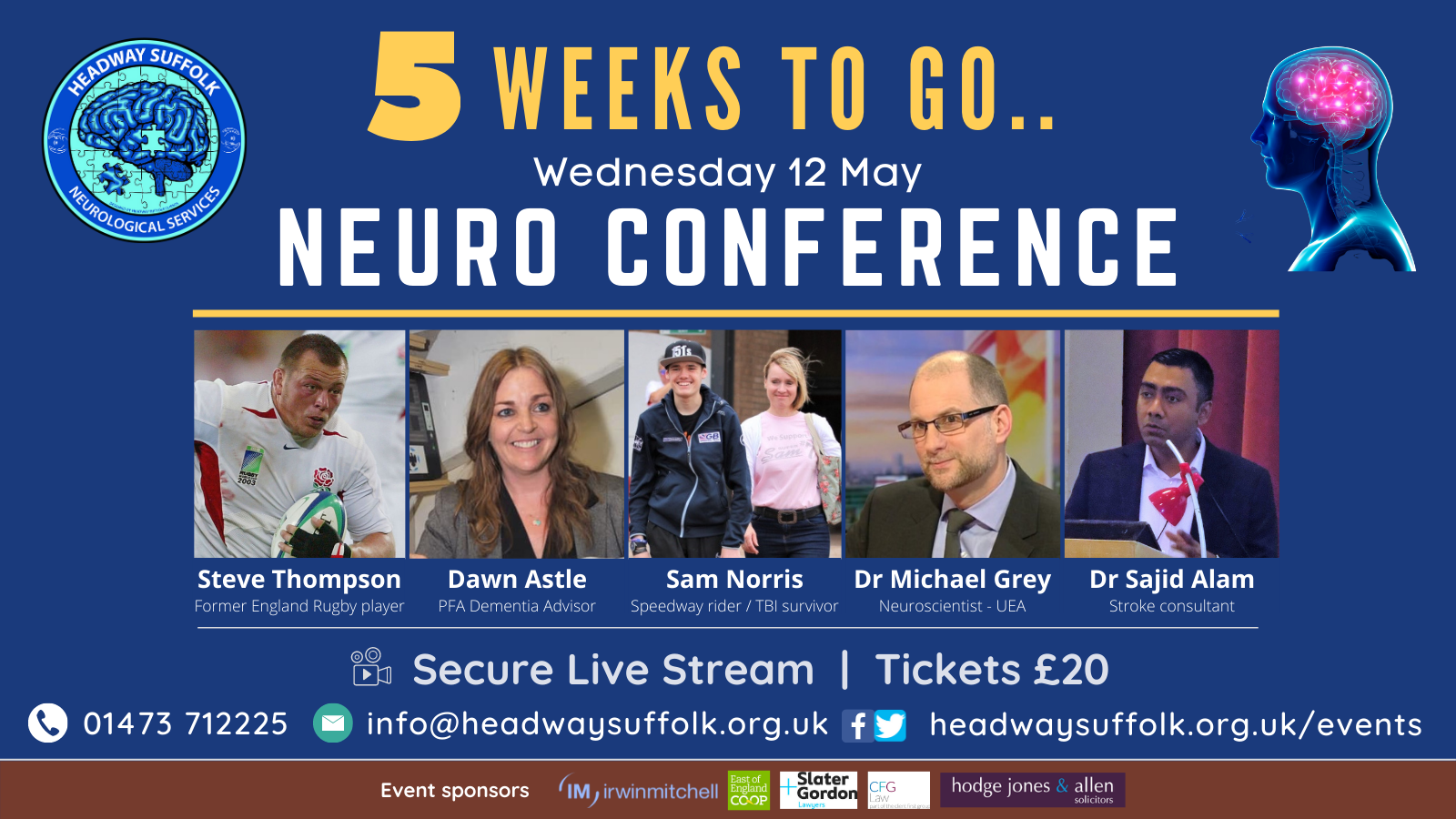 Sam and Claire will talk about their experience in their first public speaking appearance at the Neuro Conference on 12 May, with Sam finishing with poem written by them both.

The conference is being kindly sponsored by Irwin Mitchell, East of England Co-op, Slater and Gordon, CFG Law and Hodge Jones and Allen.