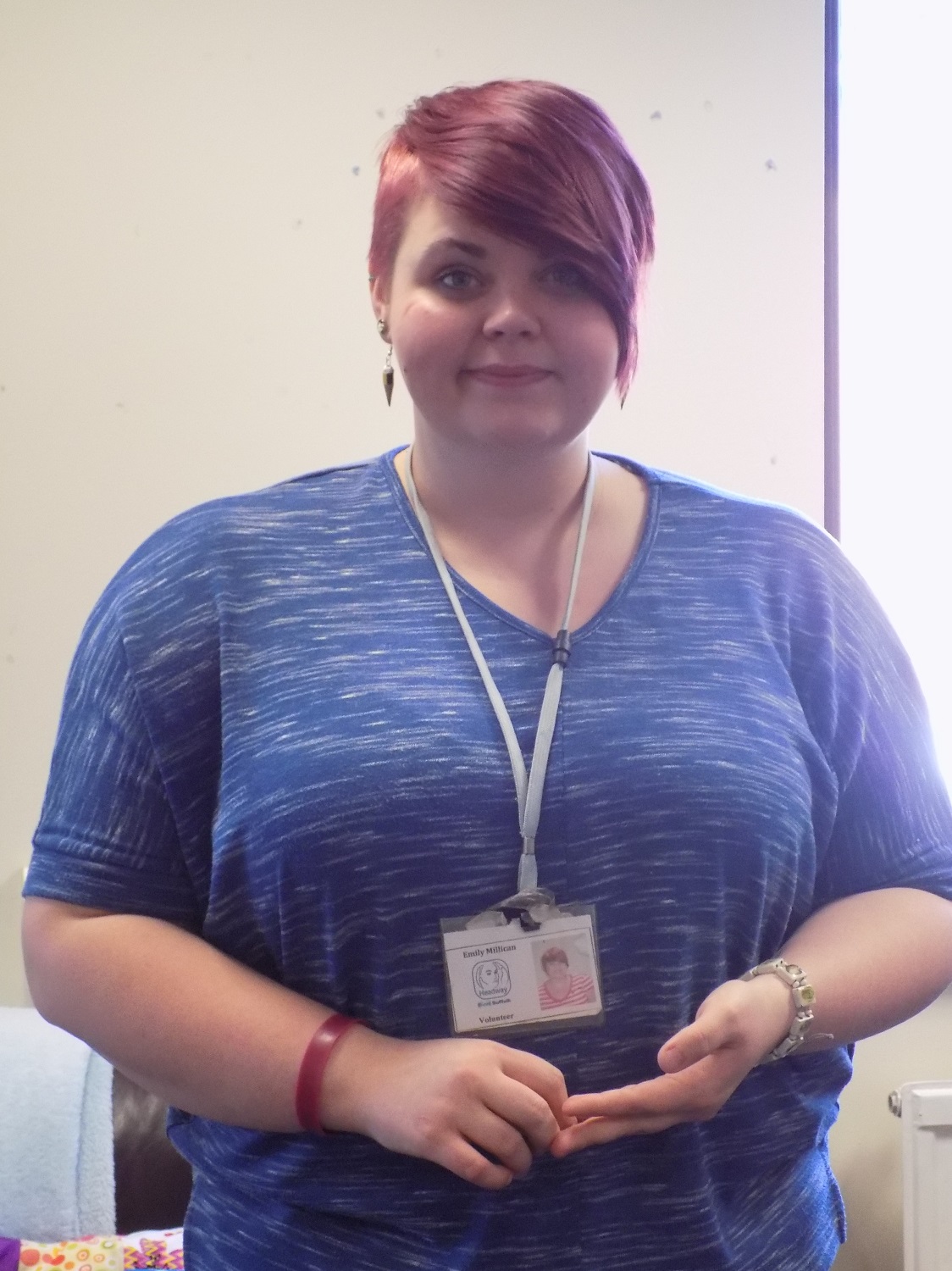 Eight years after sustaining a serious brain injury in a road accident, Emily Millican has rebuilt her life so positively that she forgets that she had the injury.

Emily was a bright and fun-loving 17-year-old studying horticultural and landscaping at Otley College when the car she was a rear passenger in lost control on a bend on the rural roads between Framlingham and Ipswich and threw her through the side window.

She has no memory of the accident, which happened on 24 January 2010, and only has snippets of memories of her recovery afterwards, including starting as a volunteer at Headway Suffolk in Bury St Edmunds nine months afterwards, where she continues to help out.

Emily, now 26 and from Diss, said: “I don’t remember any of it at all, it’s still a blank.  I remember what I’ve been told.  I had a weekend with a mate from college and on the Sunday night his friend down the pub said ‘do you want a quick lift over to Ipswich?’

“We argued over who sat in the front passenger seat and I sat in the back.  The bloke miscalculated an s-bend and lost control.  By the time he got control of the car I was coming out the side window.  I didn’t even have time to say ‘do you have a seatbelt in the back?’- that was how quick I was from getting in the car to coming out, which is a bit scary.

Emily, who went on to pass her studies, suffered a subarachnoid haematoma and broke her left arm, forehead and the top of her nose.  She spent 44 days in Addenbrooke’s Hospital, where she was induced into a coma for 15 days, and had further complications with epilepsy and pneumonia.

‘I should have broken a lot more, I think I got away with it quite well’

“I should have broken a lot more, I think I got away with it quite well,” said Emily.  “I just broke my skull and my arm so casual head injuries, not full intense ones.

“I forget most of the time I had one.  Friends will say ‘don’t hit your head’ and I say ‘what do you mean, don’t hit my head?’.  ‘You had that accident’ and I’m like ‘oh, that was like eight years ago’.  Other people remember it more than I do.

“I was in Icanho within the first eight months of coming out of Addenbrooke’s and Helen the OT there recommended that I come and see you guys (Headway).

“It was raw, but then I didn’t think that was me.  Everyone was telling me this accident happened to me and I was like ‘alright then’.  I couldn’t attach the two people, that was just past me and it felt like a twin, that wasn’t me.”

The injuries left Emily with difficulties with her speech, memory and anxiety.

She said: “I had a lot of counselling for driving.  I’d grown up on cars – I love cars, I love bikes.  There’s pictures of me leaning over the bonnet trying to get involved in cars at three years old and then at 18 I’m terrified of getting into the car because it could happen again.  You then have to have counselling to be like ‘you’re not always going to have an accident, you get into a million cars and don’t have an accident every single time.’

“The love of my life was cars and that was so difficult to hate cars.  And then to have to rediscover how much I liked them.

“My biggest achievement is definitely passing my test in the last two years, that’s just ‘wow’, I never thought that would happen.  I can’t stop smiling.  Every time I get in the car I just smile, I’m like ‘oh my God, I’m allowed to drive this legally!’  To be able to drive is amazing.

“My biggest achievement in driving is driving down to Kent last summer, I did it all in one go, and I didn’t panic, I just took it all like you can’t predict the next mile if you don’t see it.  I liked that.  That was quite nice.

“I think I’m getting better and each time I notice a difference in exhaustion, I’m not so tired this time.  I’m now doing the thinking ahead and trying to work out where I am without having to rely on technology.  That’s an achievement I think this year.

“Words – speech and language was difficult.  I was an A-level student and I swallowed a dictionary.  After the accident, I’m like ‘what’s the word for?’, I can’t think, it’s on the tip of my tongue.  And you can never remember the basic words and I still have problems with that.

“There’s words that pop into my brain and then go.  You develop tourette’s, let’s just say that’s not good in front of my baby sister who was five.  My mum came down pretty hard on that.  Speech and language was a big problem.

“I think better with memory now, not brilliant.  Just basic things, I can’t remember what I had for breakfast.  I think I’ve got an alright memory for someone who has got a head injury.”

Before the accident, Emily juggled two jobs as a gardener and in a fish and chips van.  Now she works in a pub that has helped her anxiety issues, and she continues to volunteer at Headway.

“I’m ever so empathetic, which I think works at Headway and works equally down the pub.  I am just me.  I have always said I am who I am now.

“I’ve become the person who I think I was supposed to come.  I had to have the accident when I did, and I was very lucky when I did have it because if I had it later I wouldn’t be me now.  I was very fit  – swimming, walking, cycling everywhere.  Every night I was doing some different exercise and they said in the hospital if I hadn’t been so active I wouldn’t have recovered as well as I have.  They were shocked at how quickly I did recover.

“If I hadn’t have had the head injury I wouldn’t be me and I wouldn’t have worked at Headway.  It works quite well as well as it gives you a really good insight.  People need to remember that they’re not the worst off, you’re still alive and you’ve got to really grab that.

‘You don’t see your own progress, we each see each other’s’

“I never look at me.  You don’t see your own progress, we each see each other’s, and sometimes we have to stop and say ‘oh my God, do you remember when you first started this is what you were like?’  And you have to prompt each other.

“I do this for my Dad, he’s had his tumour, and I’m like ‘you’ve got to look sometimes and go ‘this time last year I did two days a week and I was exhausted.  Now I’m doing six days a week and look how well I’m doing?’  I can’t see the progress sometimes with me, I don’t ever stop and look at it.

“I was pretty independent from the age of 14 to then have that stopped at 18, I couldn’t even remember how to pour a cup of tea.  That’s what scared me the most, because I couldn’t remember when I woke up, all I had to do was walk straight through into the shower, and before I even got into another room, I was like ’I might just go into the kitchen, I might just go and watch telly’.

“I’d forgotten what I was doing.  I think that’s what the scariest thing is, you’ve got no control because you can’t remember and you forget little things and you think they’re important and they’re really not.  It’s detaching from the pointless things, you’ve got to detach from them.  To lose all independence, that is scary.

“I had a care worker for two and a half years and she helped a lot with the structure that she gave me.  She was fantastic.  I can now organise time.”

Headway’s campaign for Action for Brain Injury Week looks at how relationships have been affected after brain injury.  Emily, who has four sisters, explains how it has impacted on her family.

She said: “Everything’s got a positive and a negative with everyone I’ve talked to since.  My mum and I are a lot more open now.  I held a lot against my mum in my teenage years for what she put on me but I’m never going to talk to her about it because it’s in the past now.

“My dad got really sensitive about it, he got really over-emotional about it for some time, but then he had his own tumour, and I think that’s helped him get through his own.  We’ve just proven Millican’s can do head injuries.  He’s not so emotional now but I’m now his little girl.

“My baby sister always worries about it happening again and I’ve assured her a lot, but I can’t say it will never happen again because I can’t predict that.  But equally she’s then not scared to get into a car so that’s good.  She’s 13 now.

“My family’s got really protective, over-protective, but then I was so young at the time and it’s difficult to break out of that.”