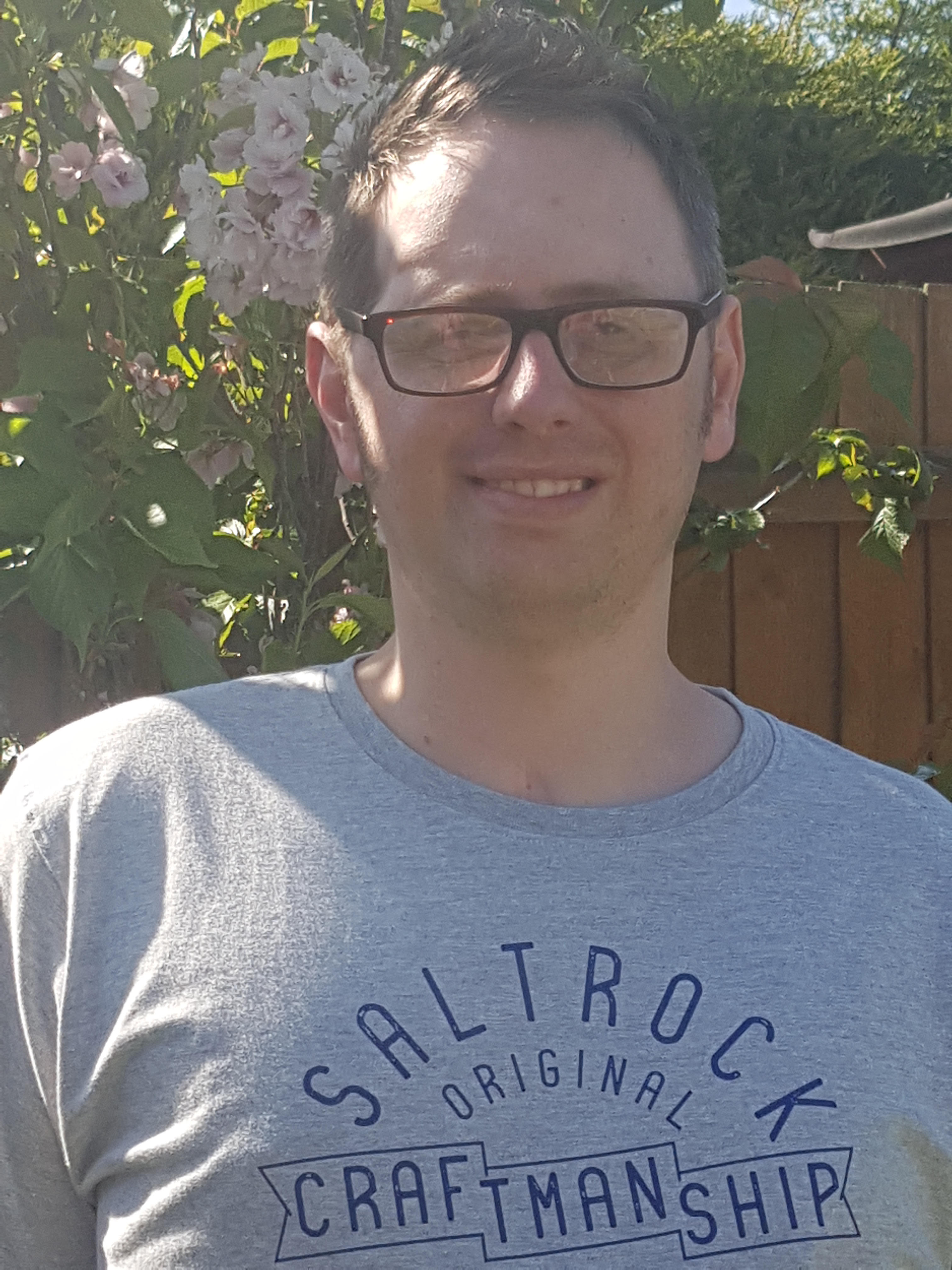 Stroke survivor Tom Canning is using his experience and recovery to help educate university students and raise awareness of the condition.

Tom, from Ipswich, was a very active and fit 31-year-old working full-time as an Enquiry Officer at Suffolk Constabulary when, on 1 May 2014, he started to feel unwell while playing five-a-side football with friends.

“I started feeling sick and having blurry vision with dots so I sat out at the side of the goal and watched for 10 minutes,” he said.  “I then started playing again for 10-15 minutes and I started feeling worse, with double vision so I decided to go home.

“I rang 111 and described my symptoms and was given an emergency appointment that evening, where they gave me an ophthalmology appointment the next morning, so I went to bed expecting to go to that and then go to work.”

The following morning Tom’s wife, who was five months pregnant with their second child, went to work, locking the front door, and leaving Tom at home with their daughter.

‘I started slipping on the laminated floor and slurring my speech’

He continues: “I was in the study and I started slipping on the laminated floor and slurring my speech.  I then collapsed, and I rang my wife and 999.  I couldn’t stand up and had my daughter terrified next to me when the ambulance arrived but they were knocking on the door as they couldn’t get in.

“I said to my daughter to go downstairs, I don’t know what I expected her to do, and she got a chair to get to where the keys were and she gave them to the ambulance team through the letterbox.”

Tom was blue-lighted to Ipswich Hospital and then on to Addenbrooke’s Hospital, where he underwent a craniotomy to remove a hand-sized part of his skull due to a bleed on the brain.

He was placed in an induced coma on life support for a month to reduce the swelling with no indication of whether he would walk, talk or eat again, before he was gradually brought out of the coma and started to respond to commands, such as squeezing a hand.

Tom added: “The first thing I remember is my wife showing me the baby scan of our new baby boy which she had done as they didn’t know what my prognosis would be.”

Tom spent six months in hospital, including at Colman Hospital’s for specialist neurological rehabilitation, and was off work for a year as he continued his recovery at Stowmarket-based brain injury specialists Livability Icanho, where he began to walk again, and Headway Suffolk.

He suffered left-sided paralysis and uses a walking pole to help with mobility.  He also wears a leg splint due to difficulties with his muscles.

Tom, now 35, receives support from Headway with his morning routine and to go to the gym to help with physio and his general fitness.

He continued: “The Constabulary was amazing.  They supported me to changing to part-time, flexible working and with adaptions.  The OT at Icanho came to talk to colleagues about how they could help me, and I started a phased return to work on Monday, Tuesday, Thursday and Friday, which gives me Wednesday off when I go to the gym with Headway.

Tom will give a lecture to Occupational Therapy students at the University of East Anglia at the end of May about his story and recovery.

“If I can help anyone in the same position as me, that is a bonus,” added Tom.

‘It can make a relationship stronger’

Tom commented: “Any brain injury can put a strain on relationships.  We had to move into a bungalow and my wife was dealing with that, a two-year-old and being five months pregnant, so it put pressure on us.  But we were very lucky as we’re strong and we got through it.  It doesn’t have to be a negative thing, it can make a relationship stronger.”