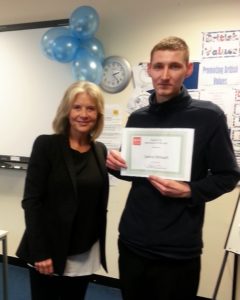 Headway Suffolk is pleased to announce that James Stewart has just become YMCA runner-up apprentice of the year.

James started working at brain injury charity Headway Suffolk in July 2014 as an apprentice.  He received support and learning from Ipswich YMCA.  After successfully completing his apprenticeship, he gained permanent employment with Headway Suffolk.

Being keen to learn and progress James studied for his Level 3 diploma in care.  He also received additional training from Headway Suffolk’s physiotherapist.

James Stewart said: “My apprenticeship has given me a sense of direction in my career after having no idea what I wanted to do.  It has helped me mentally and I have since gained in confidence to test myself and try new opportunities.  I wouldn’t be able to achieve this recognition if it wasn’t for the great team work and leadership skills from my peers.”

Helen Fairweather, CEO of Headway Suffolk, said: “We are very proud of James’s achievement and are delighted that the YMCA recognised James in this way.  Headway Suffolk has a long history with the YMCA and has supported many young people to gain their first qualification in care.  Many of our apprentices are still in post and have progressed to more senior roles.”