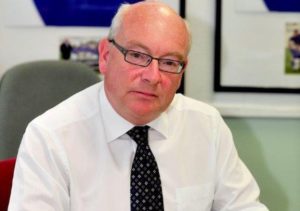 Headway Suffolk would like to congratulate our trustee Terry Hunt on being one of the first ever recipients of the Suffolk Medal, which is to reward and champion people who have made a lasting difference in the county.

He has been an invaluable asset to our Board with his expertise and guidance helping to shape the charity to continue to grow and meet its targets.

Terry was editor of the East Anglian Daily Times for more than 20 years until he retired in September 2017.

He was born and educated in Suffolk, and alongside his support for local business, sport, education and tourism, Terry has a particular interest in rural life and fully embraced his role as president of the Suffolk Agricultural Association in 2015.

“As chair of Ipswich Vision, Terry is a long-standing champion for the regeneration of our county town, Ipswich and its important role as the key driver of a healthy Suffolk economy,” the judges’ citation stated.

“Terry has been a huge supporter of Suffolk’s voluntary sector, and his endorsement and hands-on editorial support for their Suffolk Surviving Winter appeal has seen it consistently lead the UK in the amounts it has raised to support older vulnerable people during the winter months.

“Many other local charitable initiatives simply would not have delivered all that they have without his passionate and consistent editorial.”

Since Terry’s retirement, he has become a volunteer for more than a dozen organisations – he is currently a trustee of Inspire Suffolk, Headway Suffolk and St Elizabeth Hospice.

He is also chair of the development board at the Museum of East Anglian Life.

The judges added: “One of Terry’s greatest attributes is the way he has used his own personal challenges and those of his family to increase his own understanding and to take action on behalf of others.

“His approach has always been to roll up his sleeves and this has proved to be an inspiration and a catalyst for positive change to local lives across the county.”

Terry spoke of his surprise at being honoured in this way.

He said: “I am delighted, and very surprised, to be one of the first recipients of the new Suffolk Medal.

“To be honoured in this way by my home county means a huge amount to me. I was enormously privileged to be the editor of the EADT for more than 20 years, and since retirement I have been lucky to work with some brilliant Suffolk organisations.

“I would like to thank the Lord Lieutenant and the other members of the nominations panel, all the people who have helped me through the years, and especially my family for their love and support – and for putting up with me!”

Terry, along with other winners Sally Fogden and Richard Martineau, will be presented with their medals on June 20 at the Museum of East Anglian Life.

Designed by Suffolk artist Maggi Hambling and masterminded by 2018-19 High Sheriff George Vestey, the Suffolk Medal is thought to be the first of its kind in the country.

Administered by the Suffolk Community Foundation, the award’s purpose is to recognise, reward and champion “exceptional” contributions of people living in Suffolk – those who have made a fundamental, measurable and lasting difference to people’s lives.

Key elements for consideration include a clear demonstration of outstanding volunteering, either as a single feat, an accumulation of personal impact over a period of time, or a lifetime of selfless service.

Winners were decided on by a panel chaired by the Lord Lieutenant, and including Suffolk’s High Sheriff, the Police and Crime Commissioner and the CEOs of Suffolk County Council, Suffolk Chamber of Commerce, Suffolk Community Foundation and Community Action Suffolk.

Judges said this year’s recipients have made their contribution to Suffolk in a variety of ways – including outstanding leadership, ambassadorship, volunteering and philanthropy.

“Our first three recipients are truly great Suffolk people that remain unfailing in their dedication in supporting Suffolk to meet many of its most difficult challenges, while also making the most of its opportunities to prosper,” they added.

Those honoured each year with the Suffolk Medal will have their names recorded and stories told at the new Suffolk Records Office, The Hold, at Ipswich Waterfront.

Thank you to the East Anglian Daily Times article for much of this content and photo.