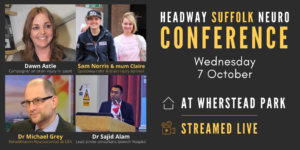 Neurology charity Headway Suffolk is delighted to confirm its four keynote speakers for its sixth Neuro Conference on Wednesday 7 October.

The conference hopes to be able to accommodate 50 delegates at Wherstead Park, near Ipswich, with social distancing and hygiene measures in place, as well as being streamed live online to allow as many people as possible to hear from the line-up of speakers. 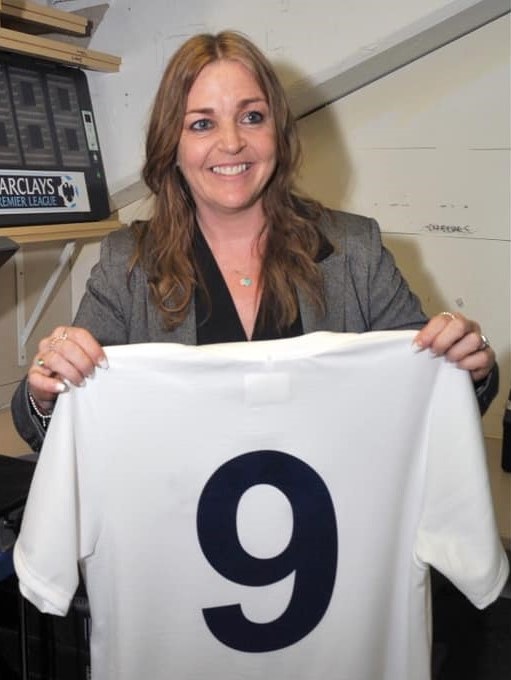 Dawn Astle is a prominent campaigner for better safety in football after the death of her father, former England striker Jeff Astle, at the age of 59 due to the concussive effects of heading a leather football.

Jeff enjoyed a 10-year career at West Brom and hit the winner in the 1968 FA Cup final. He donated his brain to medical science and research found that he had died from CTE (chronic traumatic encephalopathy), a degenerative brain disease found in individuals with a history of head injury.

Dawn and the family set up The Jeff Astle Foundation to raise awareness of brain injury in sport at all levels, and to work with governing bodies to deliver independent research into the links between sport, brain injuries and neurodegenerative illnesses. 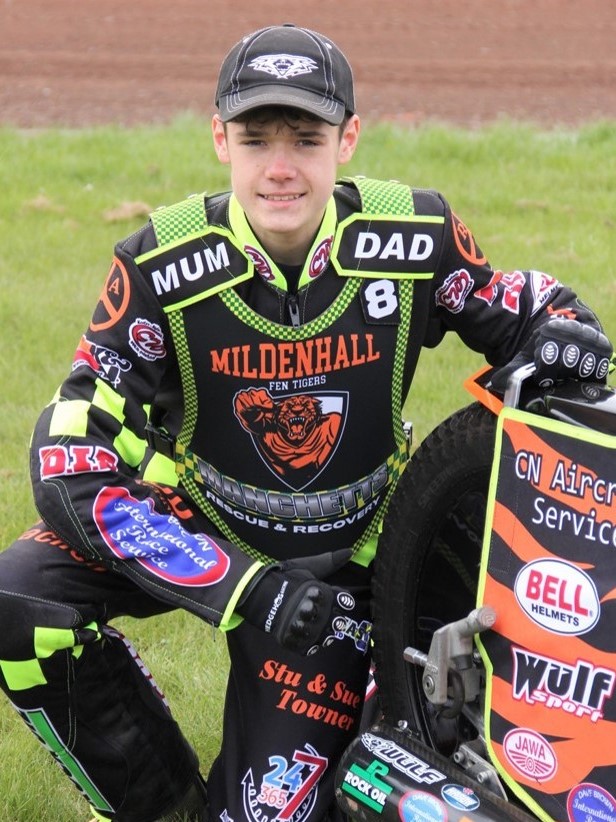 Sam Norris is a 16-year-old speedway rider from Suffolk who had to relearn to walk and talk again after being struck by a bike at 50mph while racing in a British Youth Championship in Glasgow in June 2019, which left him in a coma.

Sam’s recovery has been described as remarkable by medics and his positive attitude and intense fitness regime saw him achieve his ambition of getting back on a bike again just eight months later, despite living with chronic fatigue.

Sam will be joined by mum Claire, a special needs teaching assistant and intervener, who is keen on highlighting the hidden effects of brain injury after struggling to get the right educational support for Sam, as well as how attitudes from others can change and the importance of safety equipment. 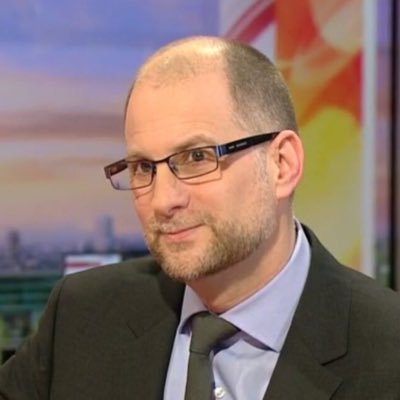 Dr Michael Grey is a rehabilitation neuroscience at the University of East Anglia (UEA), specialising in neuroplasticity and neurorehabilitation associated with acquired brain injury, including stroke and mild traumatic brain injury (concussion).

He is Co-Principle Investigator with Prof Tony Belli for the Repetitive Concussion in Sport (RECOS) trial being conducted at the Queen Elizabeth Hospital Birmingham.

Dr Grey is lead researcher into the UEA’s new project to test former professional footballers for early signs of dementia, which was announced at the start of the year. 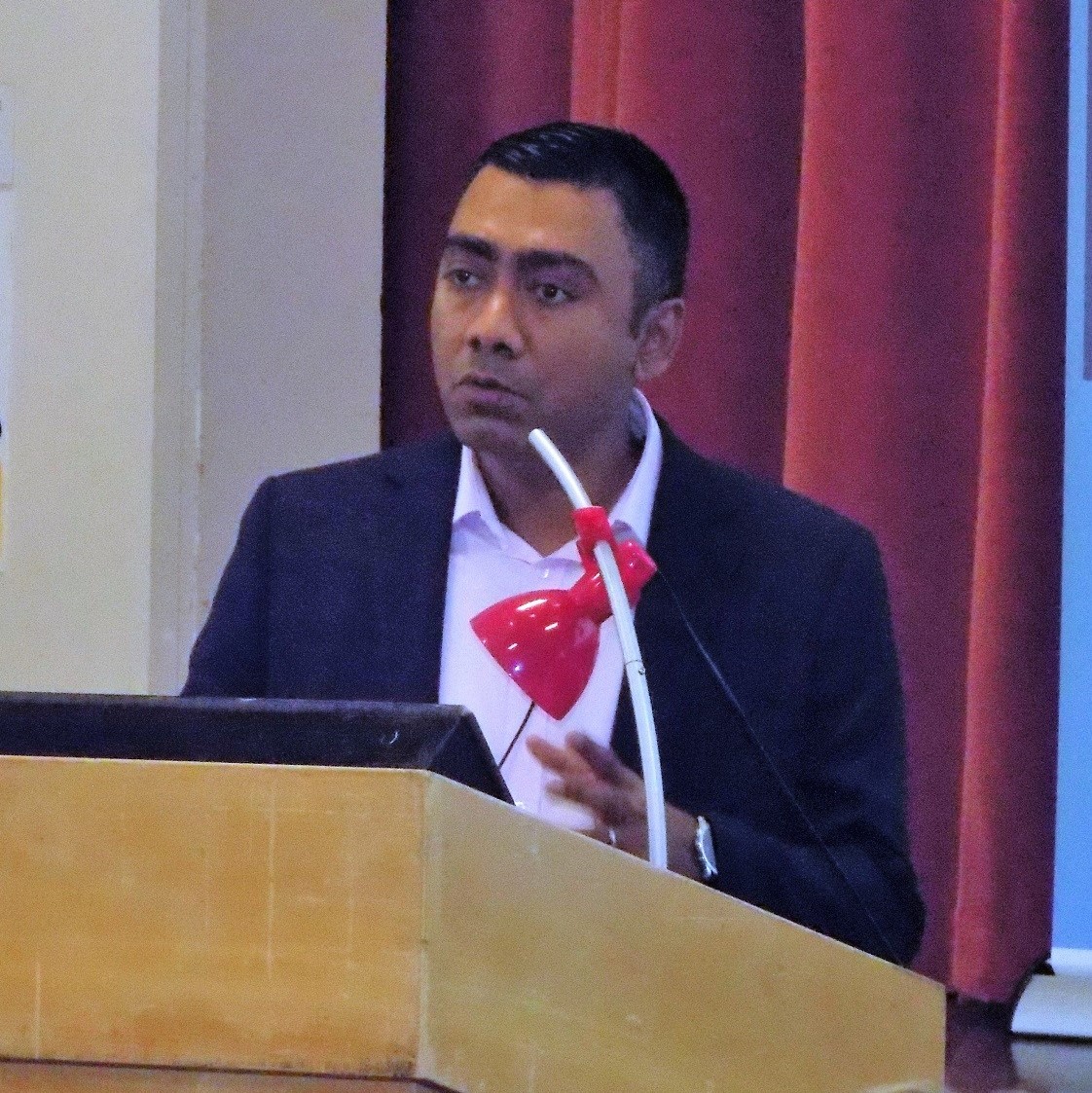 Dr Sajid Alam is a consultant in stroke medicine at the East Suffolk and North Essex NHS Foundation and a stroke lead at Ipswich Hospital.

He has a particular interest in the management of TIAs (transient ischaemic attacks or ‘mini-strokes’), hyper-acute strokes and the complex investigations often required after a stroke.

His main speciality is medicine for the older person, and his sub-speciality expertise is in stroke medicine, particularly in cryptogenic and young stroke.

Tickets are priced at £40 for the conference at Wherstead Park and £20 for the virtual conference.

If you want to save on Eventbrite’s booking fee, contact us directly on 01473 712225 or by email helenmfairweather@headwaysuffolk.org.uk.

We would like to thank our kind sponsors for making the Neuro Conference possible: Irwin Mitchell, East of England Coop, Ashtons Legal and Slater and Gordon.

Headway Suffolk has attracted great interest in its conferences, which last year featured broadcasting legend Chris Tarrant talking about his life after a stroke. 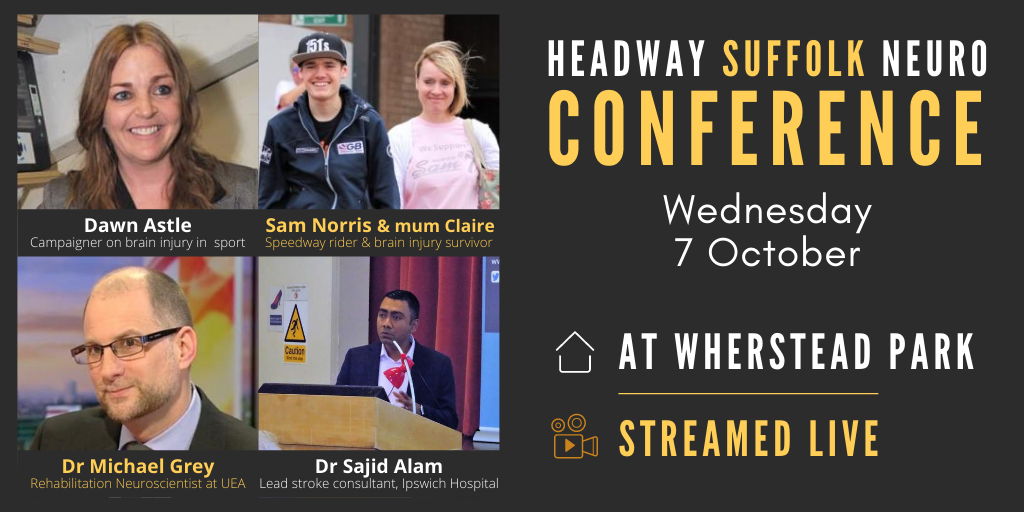 This year’s event promises to be another highlight in Suffolk’s calendar with professional keynote speakers on brain injury, stroke, dementia and neurology, as well as hearing about Headway Suffolk services and future projects.